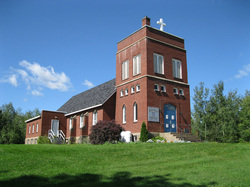 In 1930 Mr. L.E. Shaw opened his brick plant at Lantz and a community of workers began to grow around it. They attended St. George’s in Dutch Settlement. By the end of the 1940’s the church was becoming too small for the enlarged congregation. Lantz, a thriving community of brick houses, wished to have their own church.

To realize the dream of an Anglican church in Lantz, Mr. Owdis Isenor and other brick plant workers donated time, effort, money and talent to complete the present building. Those who could, made designs, laid brick & pipe and installed electric & plumbing lines. Some set windows and roofs while others hammered nails, carried loads and helped wherever they could. The ladies sewed the linen, put on sales of hand work and baked goods, catered meals, and other things to help raise the money.

Built with a red brick exterior and thermocrete interior, the church is the joint effort of the Lantz community, with the added help of L.E. Shaw and the Shaw Company. Inside the church one enters a narrow porch, with the basement stairs on the right. Double doors lead into the Nave, under a lofty vaulted ceiling. The hand carved altar fits into the bowed outer wall with choir stalls on each side. Behind the organ is a spacious vestry. The basement runs the length and width of the church housing Sunday School, youth groups, bathroom facilities and a kitchen equipped for the times. 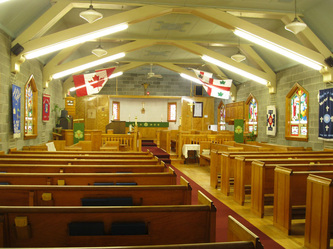 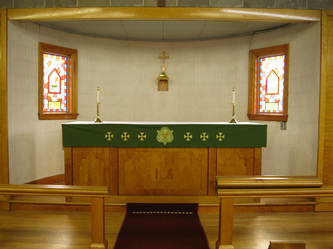 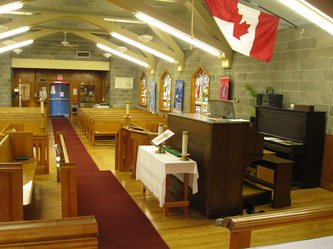 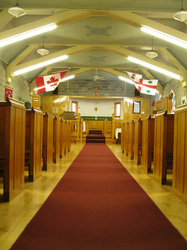 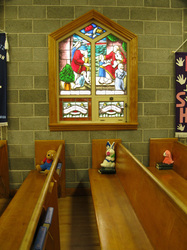 Finally, on October 13th, 1951, the entire community gathered to witness the Right Reverend Harold Waterman, Bishop of the Diocese of Nova Scotia, lay the corner stone. Reverend G.R. Thompson of Truro gave the address assisted by the Archdeacon Stead of Halifax and Deacon-in-Charge Reverend MacEachern.

The Parish of Lantz was incorporated August 8, 1952. Christ Church was dedicated by Bishop Waterman and the first confirmation was held. The next day saw the ordination to the priesthood of the parish’s first rector Reverend E. MacEachern.

The newly created parish of Lantz consisted of Christ Church, Lantz, St. George’s, Dutch Settlement and St. Margarets, Oakfield; and served the people of Enfield, Elsmdale, Lantz, Milford, Nine Mile River and Dutch Settlement. For 87 years (1865-1952) the parish had been part of the Parish of Stewiacke-Shubenacadie; now it stands as a separate entity.

St. Margaret’s, Oakfield, built in 1867 by the late General Laurie, was a private chapel on the estate for the family and servants, modeled after the Old English tradition. This little church became a part of the parish of Bedford-Waverly in 1967.

Families in the community were going to Dutch Settlement to hold burials near the graves of their families. It was decided that the growing church needed its own plot. The piece of land obtained from Shaw’s is located along the highway towards Elmsdale and is today a well kept cemetery.

Since 1977, stained glass windows have beautified the entire church, donated in memory of loved ones and dedicated church members.

Most of the family records still in existence are now in the fire proof safe in Christ Church. Sunday services are recorded in the vestry book. Folk masses have dotted our history throughout the years.

The enthusiastic choir leads the congregation in song and on special occasions presents unison and multi-part anthems, hymns and canticles.

The Men’s Club is no longer active. There are, however, several very active women’s groups; the ACW’s have a long and active involvement. These groups participate in prayer, devotions, Bible Study, fellowship and some fund-raising. The parish encourages the Brownies, Guides, Cubs and Scout programs.

Parish Council serves the entire parish. The Pastoral Ministries and Spiritual Development committees became an integral part of the parish life several years ago. Many of the laity present Prayers of the People, Scripture readings and administer the chalice at communion.

On weekdays the basement houses a pre-school; it has been serving the needs of young families for 2 generations.

In the past 35 years the area in front of the church across the driveway has been made into a delightful park with a play area for children. A fine swimming pool has been added and is dedicated to the memory of L.E. Shaw.

In 1986 the first photo directory was published and each member of the parish received a copy.

The free standing position of the altar so that the presiding celebrant faces the congregation was also instituted in 1989.  A portable altar is set at the front of the nave, when the first three rows of pews were turned to face each other (collegiate style).

As the church ages, renovations and repairs have become a reality. A new fuel efficient furnace was installed. Following a break-in in 1991, security lights and screening over the basement windows were installed. Parishioners have taken responsibility for beautifying the church grounds with flower beds, shrubbery and groundskeeping chores.