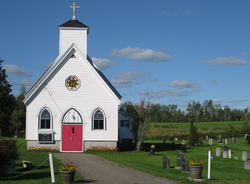 
Dutch Settlement, Halifax County in Nova Scotia, was fully settled in the early 1700’s, following a pattern of settlement along the Musquodoboit River Valley. The bulk of the families were named Isenor, Grono, and Ashley, the Grono’s being of Dutch ancestry, hence the community’s name.

Following the arrival of Bishop Charles Inglis, the area became mainly Anglican, with Inglis as first Bishop of Nova Scotia. Out in the country the earliest services were held in the open or in houses, according to the weather.

In 1829 the first Anglican church in this area was built in Gay’s River, a few miles up river, and the people of Dutch Settlement attended services there; the people either walking or driving, while the clergy traveled mainly from Truro.

Then in 1857 the Holy Trinity Church and rectory were built at Stewiacke, and a parish was formed with the Reverend Joseph Alexander responsible for the entire area. The people of Dutch Settlement continued to travel to Gay’s River until 1864 when the Gay’s River Church was destroyed and services were required to be held in homes or the little wooden school house.

By this time, the population of Dutch Settlement was starting to grow and it was decided to build their own church. The school was relocated to the opposite end of the street, where it’s modern day descendant now stands,  the church land was sanctified and loving and willing hands began to work.

By 1874, on St. George’s Day, April 23rd, the church stood ready to be dedicated "St. George’s Anglican" with it’s first clergyman, Reverend Robert Haire, awaiting the visit of the Right Reverend Bishop Hibbert Binney to perform the ceremonies, etc. assisted by Reverend John Uniacke, who would later take over the parish from Mr. Haire in 1886. The church was joined with Stewiacke and area as Stewiacke Parish, with the clergy housed in the parish rectory, and all parish records were kept there.

Following the dedication ceremonies, the area surrounding the church, which had been donated by neighbouring farmers (particularly the Keyes family), was cleared and blessed, and family graves were carefully moved from Gay’s River and reverently given permanent rest at their new home here in our own church-yard. Then the parish began to furnish and beautify their new church.

The clergy stayed either in Stewiacke rectory or near-by homes. Most stayed only a short time, until 1928 when the parish was blessed with the arrival of the Reverend Charles Wesley Saunders, who for 25 years served all the area from Stewiacke to Oakfield, including Dutch Settlement, Lantz, Elmsdale and Enfield.

Although the front of the church has changed, the interior still carries much of the original setting. 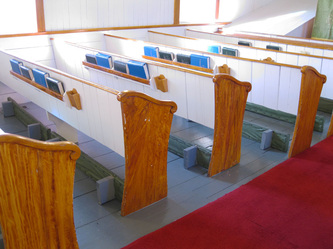 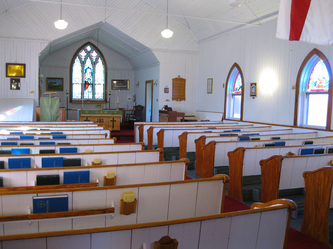 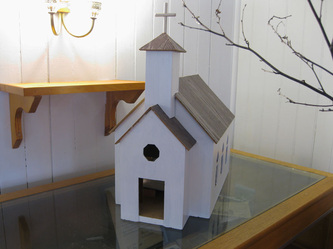 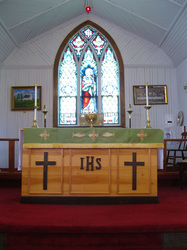 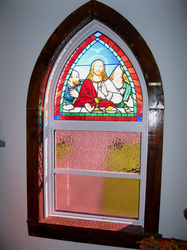 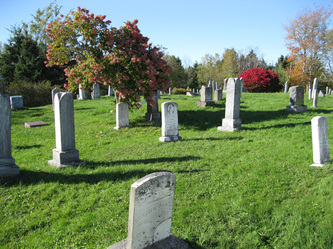 One still walks on the old 12 inch hand planed boards, while the pews show the gloss of more than 125 years of continuous contact.

Looking up, one sees the long steel braces running from wall to wall which held the oil lamps. Halfway up the aisle, two pews on opposite sides are shorter to have allowed for an old wood stove.

An early wooden hand-crafted hymn board, still in use, hangs beside the choir, but a modern organ has replaced the ancient "Harmonium".

Although a newer altar now graces the Sanctuary, the earlier hand-carved altar, crafted from a single oak tree by the late Gerald Isenor, is still in the church, visible to all. The communion service, private communion set, and large silver flagon were donated by General Laurie of Oakfield, in 1874 at the dedication. These were brought over by the family from England, and are still in use.

Much of the early décor of the church has been carefully preserved, yet it has also been brought forward in the 20th century with the addition of a tower, in place of the spire, which was destroyed by lighting in the 1930’s. A porch was added to protect the steps in winter and to provide a covered entrance/exit for the basement, also a new addition. In the early 1990’s, a rear door was added for fire safety. The windows now glow with stained glass, all in memory of loved ones.

Carefully manicured graves, honouring family members and keeping their memories green, surround the church, spreading on both sides and to the rear of the building.

As one walks around, the church presents numerous signs of devotion and love, brasses fixed to the furnishings and hand-crafted hangings help add to the long and cherished history of our beautiful church. 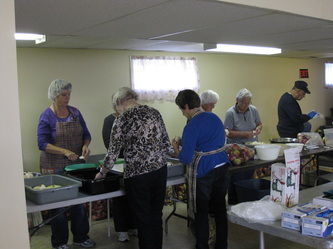 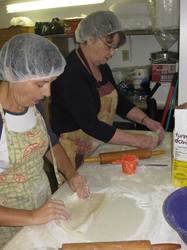